Popular Nollywood Actor Zubby Michael has caused a serious buzz on the internet after he called his colleague Yul Edochie a stingy and wicked man.

Yul Edochie who is the son of veteran actor Pete Edochie took to Twitter to ask the government to provide relief amount of atleast N50,000 to Nigerians this period of isolation and stay indoors as according to him Nigerians are turning to beggars everywhere.
In his mind, he spoke out for the people but Zubby Michael replied the tweet saying;
“People should practice what they preach because charity begins at home, this one that can not give anyone a lift even went he is driving your way” #verywickedandstingy” 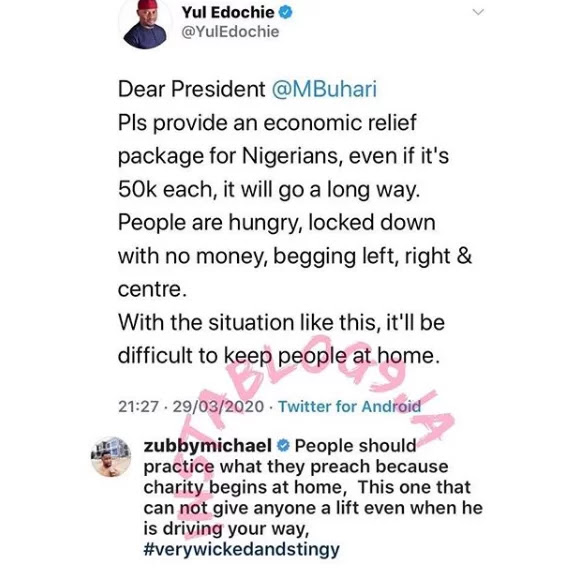 Above is a screenshot of the tweet by Yul Edochie and the savage reply he got from his colleague Zubby Michael.
Now the question is, does it mean that another buildup of hatred has commenced between these two actors?
It’s saddening!

Roman_Reigns Roman Reigns is one WWE Superstar that I personally admire so much. I love and enjoy watching him play in the ring because, when it comes to his matches there is no dull moment. The action he brings to every match is not something one can explain ordinarily. Roman Reigns whose real name is […]

Popular Afro Pop star and DMW record label boss Davido has come out clear to inform the public via his Instagram and Twitter handles respectively that his wife Chioma Adeleke tested positive to the dreaded Coronavirus disease after she returned from London with his Baby(Ifeanyi). According to the artist, he also returned from America after […]

Afro- pop Star Mayorkun comes blazing with the visual for his chart-topper “Of Lagos”. Mayorkun delivers a docu-style music video for the catchy Fresh VDM produced number which draws major influence from the Afro-house and Ampiano genres. The moving clip feature footages from the ” The Mayor of Lagos” Concert series and many more and […]